The History of Electricity 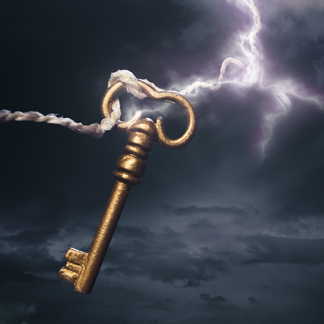 Electricity has evolved since the days of Benjamin Franklin and his kite.

Electricity has evolved since the days of Benjamin Franklin and his kite. It is one of the most important discoveries in our human history. It’s constantly around us and in us. It has the power to take life, or give it. Our bodies and brains run on electricity. It’s exciting! The word conjures feelings of exhilaration, energy, and power. Let’s dive in on a little history of electricity and how it propelled our world into the modern era.

Joules, volts, ohms, ampere, watts…these are not just measurements of energy and electricity, they are the names of just a few scientists responsible for electrifying our world. We have Thomas Edison, Nikolai Tesla, and Michael Faraday to thank for taking those discoveries further and improving on them.

Ben Franklin sparked (pun intended) the beginning of the Industrial Revolution when his experiment in 1752 proved lightning was indeed electricity. The battery was born when electric energy was harnessed by Alessandro Volta in 1800. The next 150 years was a sprint of discoveries and correlations on how to harness, use, and measure electricity.

The first electric engine was invented by Faraday, then improved upon by Thomas Davenport. The telegraph, the generator, light bulbs, and the telephone were all invented within decades of each other.

America was expanding and becoming globally connected faster. Machines that ran on steam or coal became more efficient and cleaner when powered by electricity.

Westinghouse Electric Company, founded in 1886by George Westinghouse, was a pioneer in furthering the applications of electricity. They contracted to design and supply the electricity at the Chicago World Fair. It was here that Americans saw first hand the alternating current generator that lit the hundreds of thousands street lights of the White City and the new inventions “for the home and farm, many of them powered by electricity.”

Look around your home or office. Notice how electricity plays a part in every aspect of comfort, safety, and convenience. Due to the dangers of electricity, electrical engineers must be highly trained and knowledgeable, like our engineers at Yagla Engineering Services. We are proud to have an engineering team that understands the aspects of building design that ensures the building is safe and will operate as intended. After all, the only reason you should ever be shocked, is because everything runs by design.